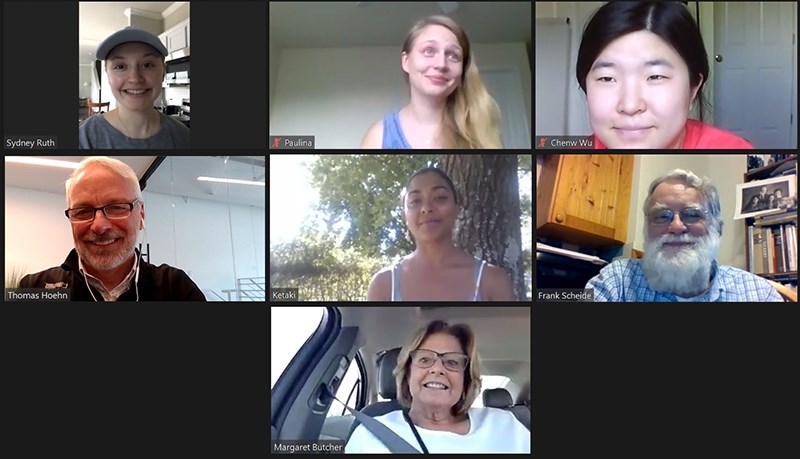 Communication students produce a documentary on women in Indian cinema

Students from the Communication Department of the U of A recently finished a documentary, Women breaking barriers in Indian cinema for the 2020 Bentonville Film Festival online. It is the second documentary project produced by university students, the first a look at Pioneering Female Filmmakers for the 2019 festival.

The 2020 student team truly embodied the Bentonville Film Festival's mission of diversity and inclusion: ChenWei Wu from China, Ketaki Deshpande from India, Paulina Sobczak from Poland and Sydney Mulvenon from the United States. Even in the midst of a global pandemic, they met virtually with their advisory teachers for many months to ensure that early voices recognition remained an important part of the film festival.

By 2020, the students wanted to explore filmmakers from other cultures and began a new effort by directing their lens toward a video of iconic Indian women titled Women Breaking Barriers in Indian Cinema .

India is the largest producer of films and since the early days of Indian cinema women have had to fight for greater access, and continue to do so. After seeing the iconic 1957 film, Mother India the team was motivated to showcase the strength of women in the Indian film industry. During their investigation, they found a 1954 statement signed by 13,000 women. The goal was to change the representation of women in movies. At the time, this was mainly like temptresses and women of low moral standards. After 1954, women progressed in the industry. The team identified six films spanning more than 100 years of Indian films to illustrate the journey of that progress.

Each of the films in the documentary was chosen as a representation of the working women of Indian cinema over time.

In each of the five years preceding the Bentonville Film Festival, experiences have been created that recognized pioneers who broke down barriers and paved the way to promote the premise that women and diversity needed a greater voice in the film industry. . There have been two exhibits at the Crystal Bridges Museum of American Art, an immersive video experience, multiple screenings of silent movies with live accompaniment, panel discussions, and more. Areas of focus included pioneering filmmakers, LGBTQ women, and African Americans.

A group of students from the University of Arkansas began working with BFF in 2019 creating a project titled Pioneering Female Filmmakers . This powerful work showed the diversity and strength of women in film over the years.

Six still images to the left of 2020 Indian movies and five images from previous festivals.