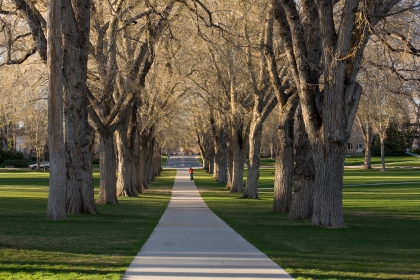 FORT COLLINS, Colorado (CBS4) – Like the Delta variant of COVID-19 in northern Colorado, filling nearly all ICU beds between Larimer and Weld counties, Colorado State University is moving forward with the preparation of more isolation rooms on its campus. CSU has notified 65 students in the Westfall Hall dormitory of its intention to transfer them to new rooms as the campus prepares to add two additional floors of quarantined isolation rooms to its list of options for housing sick students.

CBS4's Dillon Thomas learned that Westfall's 11th and 12th floors , the upper floors of the dormitory tower, are being cleared of students as the university expands the availability of isolation rooms. The floors were selected as future isolation rooms because each floor of the tower has its own ventilation system, which prevents airflow from spreading to floors with otherwise healthy students.

Some Students Now Living on the Upper Floors of Westfall Hit the Net to express their discontent at having been kicked out of their current dormitories and having to move to another room on campus.

However, Marianne Wieghaus from CSU's Office of Housing and Dining Services said that students were told earlier in the year that their housing situation could change as the school year progressed.

“Westfall Hall was designated as expanded temporary housing prior to the start of the academic year to accommodate a planned renovation project in the hall. Westfall residents were notified that their rooms would be temporary and would have to be relocated later in the year, before moving into the hallway, "Wieghaus told CBS4." The renovation project has been delayed and most of the students who live in Westfall will stay in their rooms for the rest of the year. " READ MORE: Colorado Parks and Wildlife Shares Tips for having the most enjoyable leaf-gazing adventures

Wieghaus said 355 students living in Westfall will stay in their dormitories , while only 65 have been asked to change rooms.Those affected can request a transfer to another room, or they can request to be placed in another room in Westfall that has an opening.

CSU said what e decision to clean Westfall's upper floors is not due to current demand for COVID-19 isolation and quarantine rooms. Wieghaus said that only 8% of the isolation rooms on campus are claimed at this time.

"Currently, there is enough space for students living in university housing to isolate or quarantine themselves in a residence, and there is no urgent need for this space," said Wieghaus. “However, with the county, state, and nationwide cases increasing due to variance, housing is making the additional space in Westfall available now as a contingency if there is a significant increase in cases. The cleaning of the 11th and 12th floors of Westfall is a contingency plan that provides the university with ample room for quarantine and isolation and avoids the urgent need to relocate students, should a need arise later in the year. "

As of September 10, the last time the university updated its COVID-19 statistics, more than 85% of students on campus have shown that they were partially or fully vaccinated. Of the 28,500 students projected for this fall semester, only 1,592 have received waivers to receive their COVID-19 vaccine.

In terms of personnel, more than 83% of the 8,531 employees have been partially or fully vaccinated.