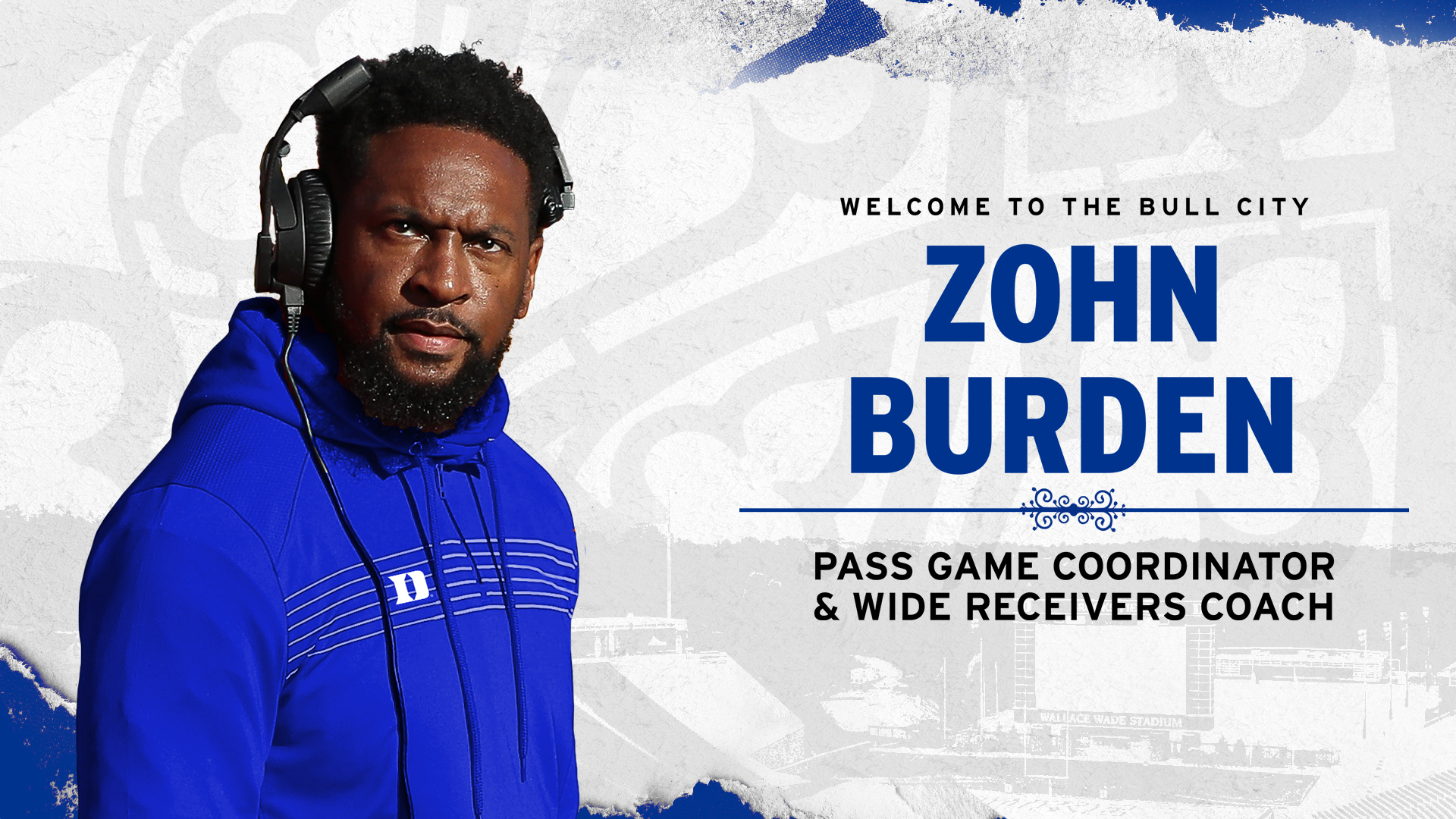 He comes to Durham after a one-year stint as wide receivers coach at the University of Maryland. During his time at College Park, Burden helped coach the Terrapins to a 7-6 record, including a 54-10 win over Virginia Tech in the 2021 New Era Pinstripe Bowl.

In addition, he was mentor to two All-Big Ten selections and had six receivers record more than 300 yards during his only season. Wide out Rakim Jarrett led the team and finished ninth in the Big Ten in receiving yards with 829, while his 62 receptions and five receiving touchdowns ranked him seventh and tenth in the conference, respectively. Burden also coached senior Dontay Demus Jr. last season before he suffered a season-ending injury. Demus Jr. had 28 receptions for 507 yards and three touchdowns in just five games and, at the time of his injury, was leading the Big Ten and ranked 11th in the country in receiving yards.

Before that, Burden founded GAME Academy in 2020, which provided soccer training to middle and high school athletes in a safe environment during the COVID-19 pandemic. The organization also helped families and student-athletes navigate the recruiting process and provided tutoring for the SAT and ACT exams.

Burden coached at Virginia Tech University for five seasons (2015-19), serving the last four as running back coach. He also mentored wide receivers for the 2015 season. The Hokies won 40 games in Burden's five seasons at Blacksburg, including an ACC Coastal Division title in 2016. He helped Virginia Tech appear in five bowl games. consecutive games and was instrumental in their recruiting efforts, helping round up three classes in the top 30 according to 247Sports.com.

Virginia Tech averaged more than 170 rushing yards per game in each of Burden's four seasons as running backs coach for the Hokies. In 2018, Burden oversaw the quartet of running backs Steven Peoples, Deshawn McClease, Jalen Holsten and Terius Wheatley, a quartet that combined for 332 carries and 1,626 yards (4.9 average) with 11 rushing touchdowns.

A collegiate receiver who set a record in his own right at the Virginia Military Academy, Burden helped make current Miami Dolphins wide receiver Isaiah Ford the first Virginia Tech receiver to produce a 1,000-yard season in 2015 when set a school record in a single season with 1,164. yards, including a 12-catch, 227-yard effort in the Independence Bowl. from 2012-14. While there, he groomed three 1,000-yard wide receivers in Antonio Vaughan (2014), Larry Pinkard (2013) and Nick Mayers (2012).

Help lead the most prolific FCS offense in 2012 when the Monarchs led the nation in scoring (45.2 ppg), total offense (548.2 ypg), passing offense (393.8 ypg) and touchdown passes (44). Old Dominion claimed the CAA title that year and advanced to the FCS NCAA quarterfinals. Under Burden's guidance, Mayers tied for second among FCS players with a school record 16 touchdown receptions. He also set single-season school records with 79 receptions for 1,233 yards, earning him All-America honors from College Sports Madness and Beyond Sports Network.

In his only season at the University of Richmond in 2011, Burden turned wide receiver Tre Gray into a record-setting wide receiver. He earned Third Team All-America honors from Associated Press after leading the Colonial Athletic Association and setting the Spiders' single-season records with 95 receptions for 1,187 yards.

During His first stop at Old Dominion between 2007 and 2010, Burden served as defensive backs coach and helped build a roster from scratch. When the Monarchs entered the field in 2009, they produced a 9-2 record, the best record for a freshman program in the modern era of college football.

Burden began his coaching career in 2006 at Fork Union Military Academy, where he coached wide receivers and high school, while also serving as passing game coordinator and recruiting liaison. While with the Blue Devils, he worked with eventual first-round NFL draft picks in defensive back Kareem Jackson and offensive tackle Anthony Castonzo. Jackson was selected by the Houston Texans with the 20th overall pick in the 2010 draft, while Castonzo was selected 22nd overall in the 2011 draft by the Indianapolis Colts.

Virginia Beach native, Virginia, Burden was a three-time All-Big South wide receiver and four-year winner at VMI from 2002 to 2005, finishing his career with 162 receptions for 2,101 yards (13.0 average) with 12 touchdowns. . He graduated second, second, and third in school history in career receptions, touchdown receptions, and receiving yards, respectively. Burden three times had 500+ receiving yards in a single season, including 742 yards on 58 receptions during his senior season in 2005.

He graduated from VMI with a bachelor's degree in psychology in 2006. He has four children of daughters Zaria and Langston, and sons Zamir and Zohn.