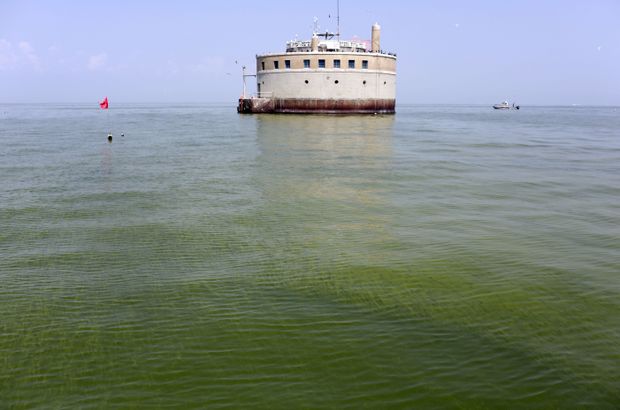 This is a big business, part of the $ 30 million awarded in the United States to "bring together scientists who conduct basic research on the oceans and the Great Lakes with people in biology and human health study the processes that affect millions of people "said the director of the Science Foundation program, Hedy Edmonds.

Each blooming of harmful algae threatens recreation and drinking water in Lake Erie every summer, especially in the western Cuenca near Toledo. Toledo in 2014 spent three days without fresh water due to flowering. Cleveland even tested a bloom during the July 4th holiday weekend at Edgewater Beach.

Nitrogen and phosphorus, most of them from the Maumee River basin, create the layer of toxic blue-green algae, but scientists are still studying what exactly causes it to spread. And environmentalists are trying to reduce the phosphorus that flows into the lake.

Officially announced at a press conference today, the Lake Erie Center will study how environmental factors promote or limit flowering, what factors influence toxin production and how "Other microbes influence flowering growth and toxicity."

"As a public university we have an obligation to serve the public good," BGSU president Rodney Rogers said in a press release. "We do this through research that works to address the problems of the public real world threatening Ohio, the country and the world, this grant from NSF and NIEHS is a strong show of support and recognition of the quality and importance of our research on the proliferation of harmful algae. "

The center, led by BGSU professor George Bullerjahn, will include eight other universities and research institutions:

The center, according to the Science Foundation, will direct outreach activities, including with the captains of rental boats to develop a database on the severity of blooms in Lake Erie. And it will work with universities in Florida and Washington, for example, to compare the blooms of the lake with the red tide that infested the Gulf of Mexico and with algae all over the world.

"The grant gives BGSU the resources to be a national leader, and builds on our previous collaborations," said Bullerjahn. "The center greatly expands our scientific capacity, and as a result, we can address threats to water quality not only in Ohio, but in large lakes around the world.The participants of the center have collaborators in China and Africa, regions that are usually plagued by blooms of similar harmful algae. "