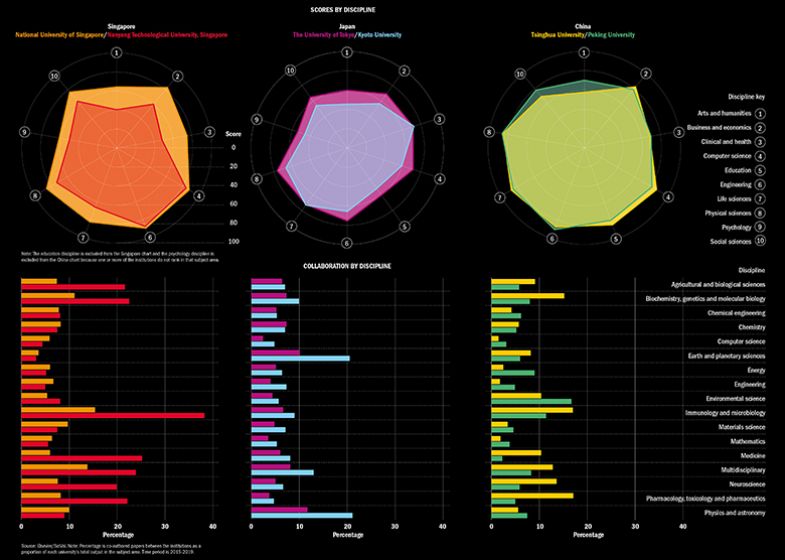 See the results of THE Asia University Rankings 2021

When a University of a country performs well, it is not unusual to find others from the same region or nation very close. But do these universities work closely together to improve their overall standing or do they tend to build on their strengths in a particular discipline?

Data from the latest edition of the Times Higher Education Rankings world universities and the separate figures on research collaboration provide some insight into these issues.

According to the overall scores of universities in different subject areas, pairs of highly rated institutions from the same country often coincide closely in different disciplinary areas, but sometimes there can be clear water between them as well.

Scores and Collaboration by Discipline

Note: The discipline of education is excluded from the Singapore radar chart and the discipline of psychology is excluded from the China radar chart because one or more of the Institutions are not classified in that subject area. In the bar graphs, the percentage is the co-authorship works between the institutions as a proportion of the total output of each university in the subject area. The time period is 2015-2019. Source: THE World University Rankings; Elsevier / SciVal.

Click on the image to see a larger version

Other data on the co-authorship of research between such universities from Elsevier's Scopus database suggest that this differential performance it could also influence collaboration between neighboring countries.

For example, a much higher percentage of Nanyang's research in health-related disciplines involves working with NUS than the other way around, while in technology disciplines, there is comparatively less collaboration on Nanyang's part. For Kyoto and Tokyo, the pattern is not as distinctive, but there is a clear inclination towards collaboration in some physical science subjects for Kyoto.

At the best universities in China, the patterns are less obvious because both Tsinghua University and Peking University similarly excel in most areas. But in collaboration, there seems to be more trust in its close neighbor in some disciplines: Beijing for engineering and Tsinghua for life sciences, for example.