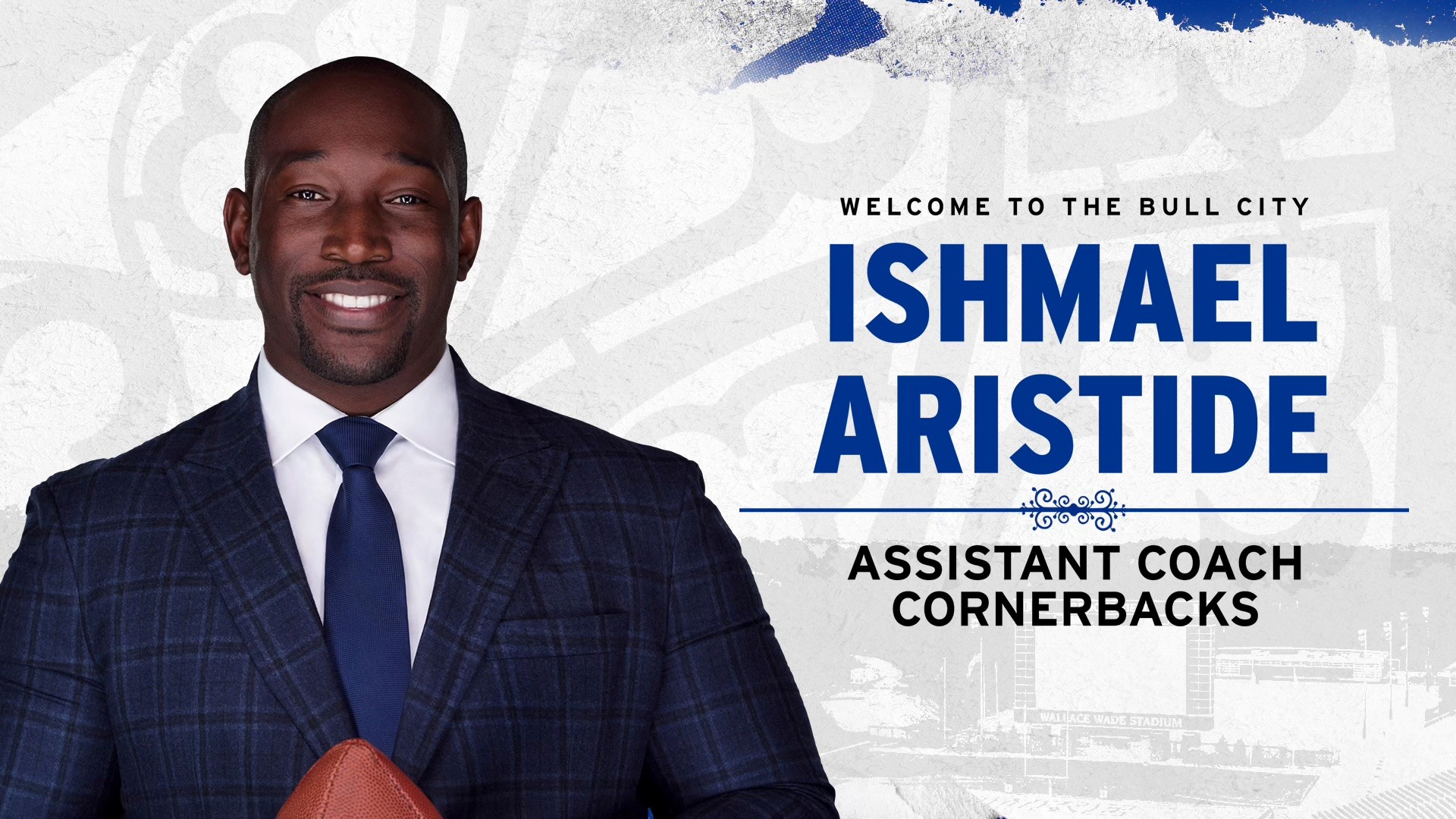 Aristide and Elko served together on the defensive corps at Texas A&M University from 2019-20, helping the Aggies post a two-year record of 17-6 and wins at Academy Sports + Outdoors Texas Bowl and Capital One Orange Bowl. Aristide was a senior defensive analyst and secondary assistant during his time at College Station.

He comes to Durham after a one-year stint on the University of Miami staff, mentoring outside linebackers. The Hurricanes finished the 2021 season with a 7-5 record and an invite to the Tony the Tiger Sun Bowl. Aristide mentored Amari Carter and Gilbert Frierson during his only season. Carter finished third on the team with 45 tackles, three tackles for loss, one interception and two quarterback rushes, while Frierson contributed 41 tackles, 3.5 tackles for loss and one sack.

Before his While in Coral Gables, Aristide served two years with Elko at Texas A&M. During his time there, he worked with a defense that ranked No. 9 in the FBS in total defense (317.3 yards per game) in 2020, leading the SEC in that category and ranking No. 4 among Power 5 schools. Texas A&M finished that season ranked No. 2 in the country in rushing defense, allowing only 92 yards per game.

Aristide's previous two seasons (2017-18) were spent at the University of Mississippi (Ole Miss). serving as lead defensive analyst and secondary assistant. While at Oxford, he collaborated with defensive co-coordinator and safety coach Jason Jones to help with the secondary, game planning, opponent scouting and film breakdown.

His career Coaching began at Auburn University in 2016, where he was a defensive graduate assistant coach. During that season, the Tigers went 8-5 overall, including a Sugar Bowl appearance. Auburn finished the year ranked 11th nationally in red zone defense (.744) and 28th in total defense (361.9 yards per game), up from 71st in 2015.

Aristide is a 2013 graduate of Purdue University with a bachelor's degree in innovation and technology leadership and was a three-year letterman in safety (2010-11) and wide receiver (2012) and was also a member of the track and field program, earning three -time Big Ten Academic All-Conference honors. After graduating from college, he worked for Deloitte Consulting LLP from 2013 to 2016 before joining the Tigers' coaching staff.