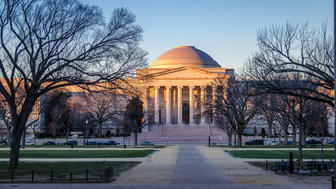 A rope hanging from a lamp outside the National Gallery of Art in Washington, DC was discovered, marking the third such incident on the National Mall in recent weeks.

The rope was found on Saturday around 3 p.m., the sergeant of police of the United States. Anna Rose told HuffPost. The authorities continue to investigate how the object arrived there.

Two more ropes were discovered near museums in the National Mall last month. On May 31, tourists who visited the National Museum of African American History and Culture found one lying on the floor while walking through an exhibition on segregation. Less than a week earlier, a security guard found a rope hanging from a tree at Hirshhorn Museum and Sculpture Garden.

The rope is widely considered a symbol of hatred, derived from the Jim Crow era of mob lynching. According to the Anti-Defamation League, "the hangman's rope has become one of the most powerful visual symbols directed against African Americans, comparable in emotions evoking that of the swastika for Jews."

A spokeswoman for the Metropolitan Police Department said there have been several reports of ropes in the nation's capital in recent months.

"[The MPD] has approached to offer support to the various establishments where these crimes have been committed," according to a statement issued by the MPD. "The department will not tolerate illegal behavior in our city, we encourage anyone with information to contact us at 202-727-9099."