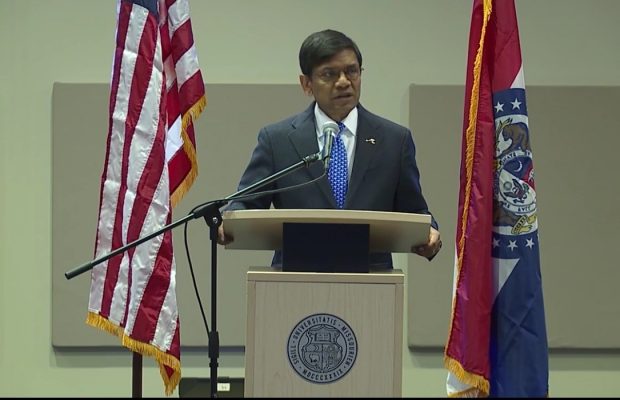 The autumn change came with all its force to UMKC, and not only because of the brightness of the trees on campus.

Chancellor C. Mauli Agrawal gave his inaugural address to the State of the University on Thursday and presented some changes of his own

"[Chancellor Agrawal] knows that something wonderful is going to happen here, and wants us to be part of it", said the President of the Senate of the Faculty, Steve Dilks, in his presentation of Agrawal. "He wants us all to join him as part of an extended family that supports each other."

In order to grow that extended family, Agrawal announced a partnership between UMKC, UM System and KC Scholars, a foundation that provides financial assistance to students in the Kansas City metropolitan area who wish to attend college. Through the partnership, $ 20 million in need-based scholarships will be awarded to 400 local students to attend UMKC.

By listening and learning during the past four months, Agrawal has helped create a five-pillar strategic plan to take the university to the next decade. The plan aims to improve UMKC and the Kansas City metropolitan community that surrounds it.

Despite some obstacles, Agrawal is confident that UMKC can become a high-ranking urban public research university.

"As a newcomer to this campus and this community, my first responsibility was to listen," Agrawal said. "I've learned a lot about strengths as a university … and now I know about the problems we've overcome, and the problems we're still facing, and that we need to address."

According to Agrawal, the strategic plan is a roadmap that provides specific milestones and a clear direction for the value of the next 10 years of implementation. Within the plan, five pillars made up of numerous individual initiatives are miles markers along the way. Some initiatives specifically mentioned by Agrawal during management include:

All these initiatives, and more, are individual objectives of the UMKC strategic plan.

The speech on the state of the university was also an opportunity for Agrawal to honor individual students, teachers and staff members. Among the honored students is the UMKC women's football team, which won the Western Athletic Conference championship for the second year in a row and published a 3.75 GPA for the 2018 season.

Undergraduate student at Bloch School, Salem Habte, was also honored by Agrawal for her success and achievements as a young entrepreneur, and gave young artists in the Kansas City area the business skills they need to advance their careers artistic

Although the chancellor has been a Roo for less than a year, he has the campus and the community prepared for big changes. Undeterred by any potential obstacle, and confident in the talent and potential of UMKC, Agrawal is sure of one thing:

"True greatness can be achieved here."