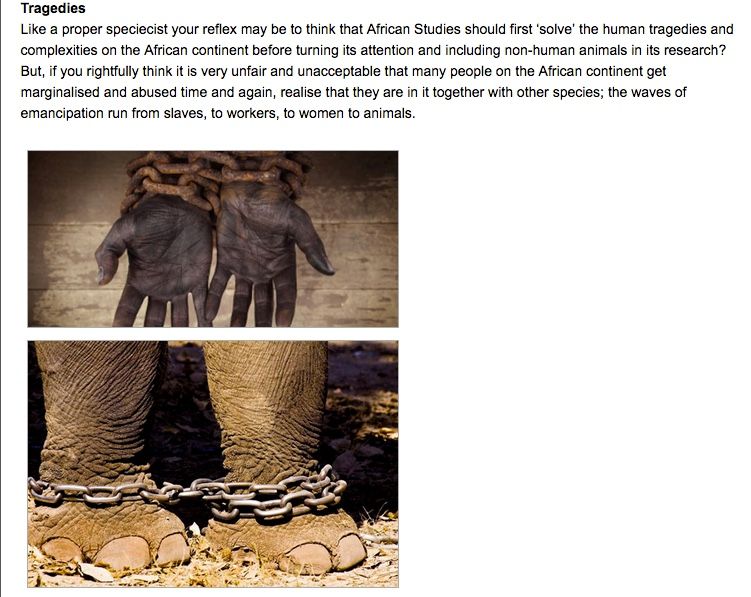 One of the most prestigious universities in the Netherlands is offering a twist to their African studies curriculum. With a blog post titled, "African Studies Becomes Animals," the University of Leiden announced a new research project to include "animal perspectives" in the programs of its Center for African Studies. Although well intentioned, the project raises uncomfortable questions about the representation of Africans.

Led by the organizational anthropologist Harry Wels, the research project aims to include the perspective of animals in a social science traditionally focused on humans. Faced with growing scientific evidence that animal behavior is more complex than previously thought, Wels wants the discipline of African Studies to participate in this growing understanding of animals and their interactions with humans and each other.

The project includes one of the most popular trends in the social sciences at this time, the "intersectionality". While intersectionality is generally used to explain how political, cultural, gender and other identities intersect to offer diverse perspectives, the Wels team wants to add species to the framework. He specifically uses examples of the colonial plunder of Africa's environment and the global protest surrounding Cecil the Lion's hunt.

The so-called "animal turn" in the social sciences is a valid area of ​​research, but positioning it in African Studies in this way is a "poor choice" because it could create a "false equivalence between human and animal experiences," says Nicole. Beardsworth, doctoral candidate at the University of Warwick.

"This is especially the case in Africa, where animal experiences are often treated more carefully than people," said Beardworth. "Cecil the Lion is a good example. "

The project announcement inadvertently plays on a pejorative depiction of Africans that has been used for centuries, most recently at a photographic exhibition in China that used images side by side to compare Africans with monkeys and apes, although Wels is not deliberately trying to compare Africans with animals, he still plays with a narrative which has been used to oppress and subjugate Africans by painting them as inferior. There is an image that Wels uses in the blog post that is particularly disconcerting, and reminds us of this narrative: The image of an African with shackles juxtaposed with a chained animal.

In an email to Quartz, Wels said "it does not equate human and animal suffering"

"I am VERY aware of the history Offensive comparisons of animals and Africans side by side, "said Wels. "I am also very aware of my own position as a white European man (of a certain age ;-)) in academia in general and in African Studies and this particular debate"

The Wels project is part of the growing challenge to anthropocentrism, an approach to human-centered theory. It is a vision rooted in the European traditions of continental and analytic philosophy, the Western traditions of religious thought and Darwinism.

This also happens to be a position that has not only excluded African perspectives, anthropocentrism has also been used as the theoretical basis of hard politics. As the thought of Immanuel Kant contributed to the illustration that gave the world his concept of human rights, he also maintained deeply disturbing views about race. In the same way, Charles Darwin, who helped the world understand evolution, remained with offensive beliefs regarding the natives of Australia.

Wels' approach to animal perspectives has value in raising awareness and empathy about poaching and other forms of environmental degradation. However, its positioning in African Studies is problematic. A look at the American, Latin American and Asian studies of Leiden, gives no indication of similar attempts to include animal perspectives. It could be argued that European, American and Asian industrialization has taken place at the expense of the natural environment.

African academic disciplines, such as political theory and science, philosophy and design, are already burdened with proving their value to their international peers in the first place. In a continent that is still fighting for its place at the academic table, this will not amplify the ignored voices of Africans.

Register for the Quartz Africa Weekly Brief – the most important and interesting news from across the continent, in your inbox.