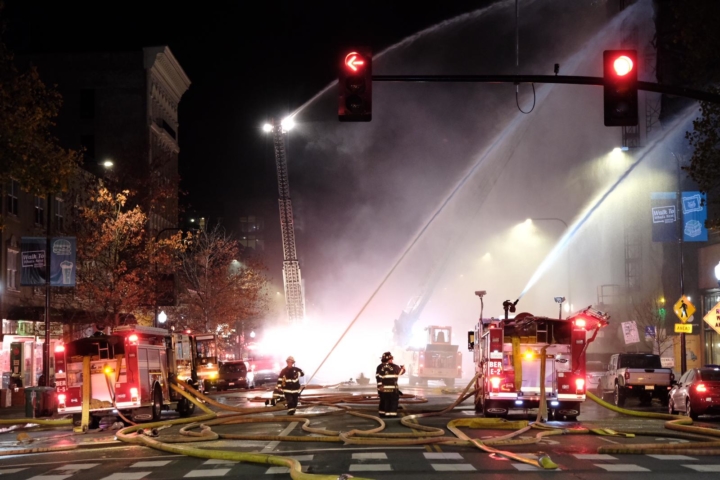 A 6-alarm fire breaks out in downtown Berkeley

Firefighters and police responded to a fire from six alarms in downtown Berkeley Saturday night in a building under construction on University Avenue, according to preliminary reports.

The fire was reported at University 2067, a new seven-story building under construction west of Shattuck Avenue, just before 5:40 p.m. No injuries have been reported

No information was available around 7 p.m. as to how the fire started, but Berkeley's Assistant Fire Marshal Keith May said firefighters from Berkeley, Albany, Oakland, Piedmont, and the city and county of Alameda were on the scene.

Police officers evacuated buildings in the 2000 block of University Avenue to Shattuck Avenue while firefighters attacked the fire, according to emergency dispatch traffic. The block includes many local companies.

First responders expressed concern over the radio that the building could collapse on University Avenue as a result of the fire. The street is closed to traffic during the emergency response.

According to initial reports, callers saw flames moving from the second floor to the third floor, with white smoke . The fire quickly upgraded to a two-alarm fire and was eventually classified as a six-alarm fire.

As of 6:45 p.m., authorities were shutting down all eastbound traffic on University Avenue from Martin Luther King Jr. Way to allow additional firefighting resources in the area.

First responders also called PG&E, the East Bay Municipal Public Services District, and the American Red Cross, according to reports from the scene.

This story has been updated due to the unfolding nature of the events.

Help us keep you informed in tough times

Berkeleyside relies on reader support so that all members of our community have free access. Donate to help us continue to provide you with reliable and independent reporting.